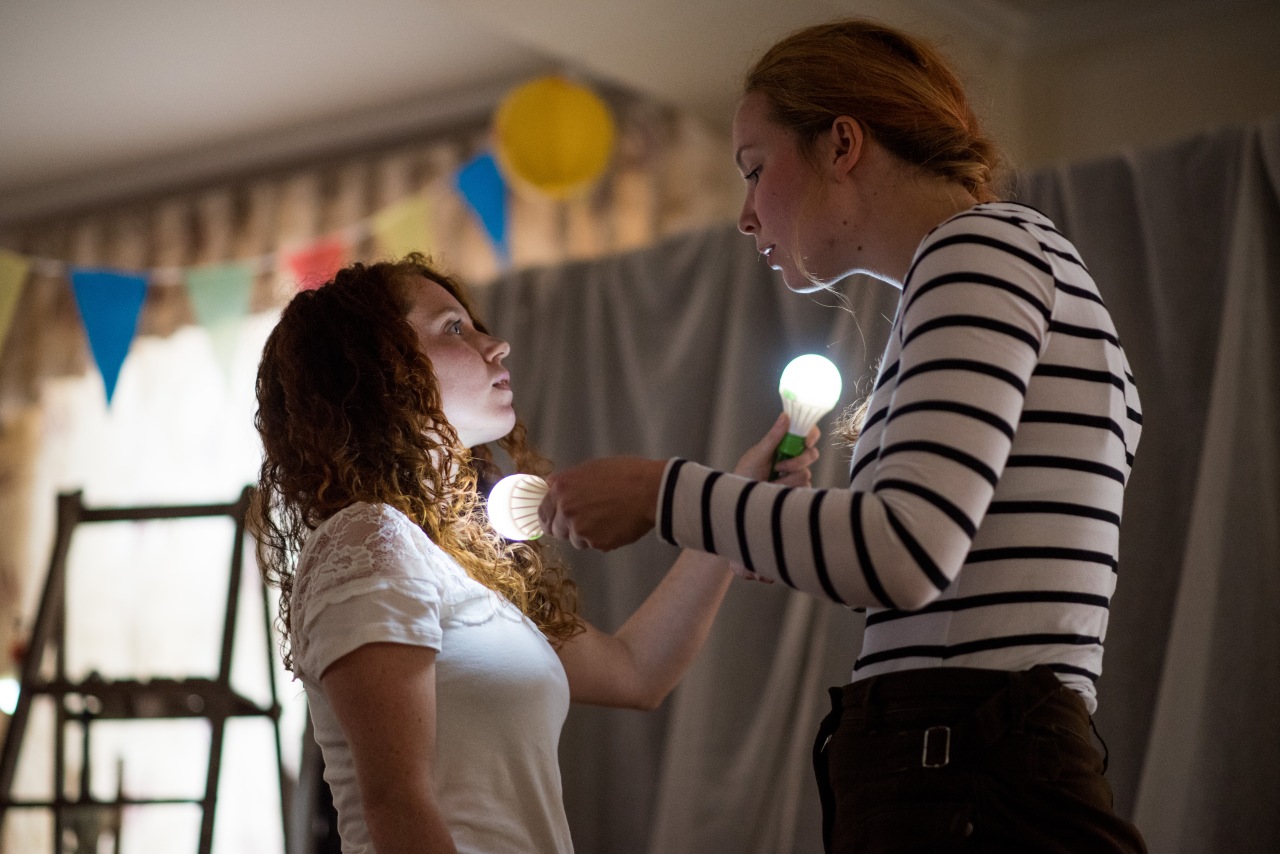 ‘A little bit of light’ – the title perfectly sums up my experience as a performer in this piece.

As we arrived each day of the tour at a new venue, ranging from residential care homes, leisure centres and hospitals, there was always a sense of going into the unknown. Each setting had its own particular routines, support systems and of course the most important variant; audience members that displayed a fantastic array of characters and personalities that I am privileged to have encountered.

We would often meet the audience informally before beginning, usually over a cup of tea, a bonding ritual not to be overlooked! I don’t know what life is like day to day having a degenerative illness such as dementia, that many of our audience were living with. I only could get a sense of what they might be feeling in the moment of our meeting.

I would often think there is no way to know what a difference we can really make to people’s experience of life, from just the one hour we had with them. The equal playfulness and intimacy of the piece, provoked laughter, encouraged sensitivity, and inspired childlike wonder. We would transform a familiar space into something completely new. However fleeting this offering of lightness might seem in the grand scale of things, surely every interaction within all the moments that makes up a life must count. 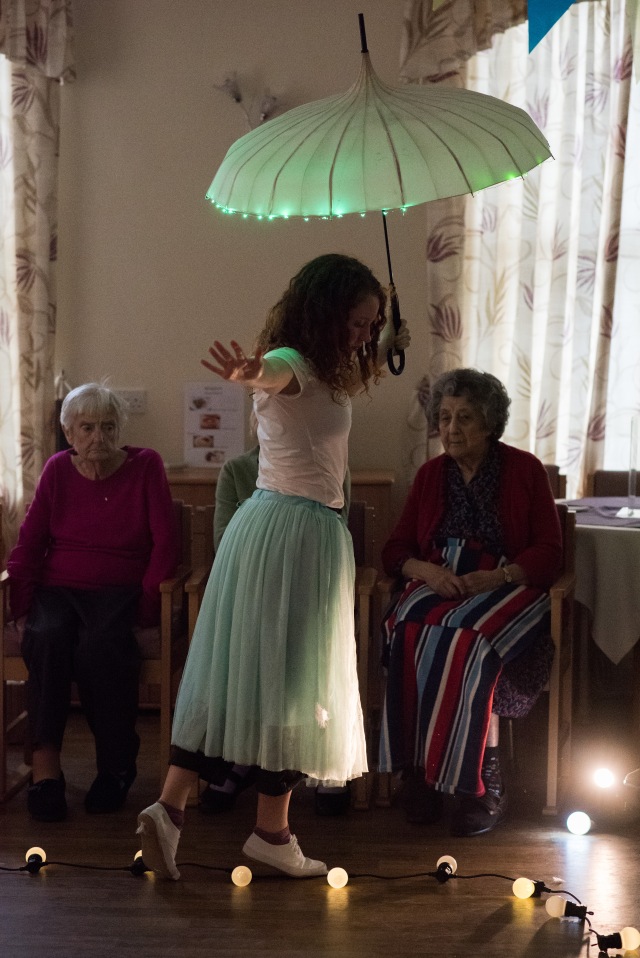 On the first day of the research process, the directors of GlassHouse, Laura and Sarah expressed the desire to make a happy dance. This concept might seem simple but if you really delve deeply into what it might mean to communicate a little bit of light the implications are profound. GlassHouse expertly crafted a piece that made it impossible not to smile, for performers and audiences alike.

Where to begin, hmmm let me start with three words that I feel best describe my experience with GlassHouse:

I have recently been working with Sarah and Laura on their new project ‘Us’ a new addition to the existing work ‘You, Me & Everybody Else’ which I too had the honour to be involved with. I have had the privilege to work alongside colleague and friend KJ Mortimer, a super talented dance artist who I share the studio, stage and street with. My partner in crime so to speak. Not to mention being guided, nurtured and supported by both Sarah and Laura, two amazing women with vision, drive and charisma whom I have learnt an abundance of new skills from.

Ok, so I am going to start by talking about the uncanny line up of events that went hand in hand with the latest research period.

Serendipity is the word I will use to describe the week. In all of its glory it was there shining in lights. There is not enough sparkle hands to describe how apparent this word was.

One task that was given during the process was to act out fantastical ideas, games and scenarios. Of course me being the big child that I am I took to this like a duck to water (Oh my ducks, that’s another story. Ill get back to that later.) KJ and I ripped up small bits of paper and wrote down scenarios or powers for one another to act out. I choose “dragon slaying” as one of my fantasy roles, who dosen’t want to be a dragon slayer? As you can imagine the studio quickly transformed into a cave, with bats, fire-breathing beasts and me running around pretending to spit flames and singe KJ’s eyebrows off. After the day had finished and we were making our way back to the car, it dawned on us that Norwich is currently being taken over by Dragon statues. Dragons here, there and everywhere. My mind was blow. I took it as a sign, that we were on to good things.

I move forward with the incidents. All four of us were having a beautiful ciabatta from House (cafe around the corner) when Sarah shrieks from across the table, frantically rushing for her mobile phone.  There on a shelf stood solemnly by itself was a dice. The dice was not covered with dots amounting to six, no no no, that would have been too ordinary. This dice had letters on its faces. Miraculously there was a U and a S and the way the dice was positioned is spelt US. Not everyday you find a dice with no dots and the letters U and S. Serendipity strikes again.

It doesn’t stop there. After discovering that Sarah has a drop down projector screen I could not let this go to waste. Movie night happened. Whilst in the library sifting through DVD after DVD, for some reason I glance around the shelfs and there, staring at me in the face was a book titled ‘US’. Mind blown round 2. Out of intrigue I picked up the book and wanted to know what it was about. It was about a love story between a boy and girl, similar to the work me and KJ where investigating. Magic. I now believe in magic.

Lastly, during the fantasy role play, Star Wars came up. Light sabre fights and Luke Skywalker (that’s me obviously) had to teach princess KJ how light sabres work and sound. I got heavily involved with this task and annoyed at how she didn’t know how they sounded or had even seen the film. Mind blown 3 but for a different reason. Anyway back to serendipity. I found myself in the shop LUSH, a shop which I never ever go to or find myself having the need to go to. There I was in LUSH basking in the perfumed filled air and I feel a tap on the back of my right calve. I didn’t turn around straight away as I thought it may have been the wheel of a pram or an accident, until it happened again but with more force. Naturally I turned around and I was again jaw dropped at what I saw. A small boy playing with a plastic light sabre from Star Wars. Floored. Mind Blown 4

Thank you so much for a fantastic week and I can’t wait for the future… Oh and the ducks, I witnessed ducks walking in a line. A perfect line. Amazing xxxx

We asked KJ (one of our fantastic dancers) to share her experience on creating ‘Us’ with GlassHouse. This is her response….

I am lucky to have been working with GlassHouse for over a year now. I started with the company back in April 2014 with the creation of “You, Me & Everybody Else”, I am currently working on the creation of “Us”. I feel very privileged to be a part of such a wholesome company which nourishes my creativity and pushes my performance skills in new exciting directions.

What a wonderful journey it has been so far… Beautiful people creating a beautiful and free environment to hatch fresh ideas. Throughout this week GlassHouse (Laura McGill and Sarah Lewis) have been researching and creating with both myself (KJ Mortimer) and Luke Brown for new work which will (fingers crossed) tour in the near future. 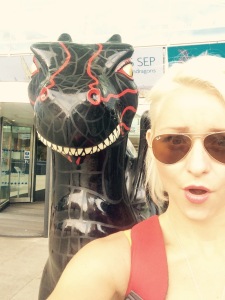 I am writing this blog on my train home from our first week and am feeling full up of gratitude… At the forefront of my mind stands the feeling of how special it is to work with lovely people whom you can share laughter and drive to create work you all feel excited by. This week has pushed Luke and KJ’s Characters within the GlassHouse narrative to another level, another space in time and whole new realm of fantasy and imagination! It’s been a delight to work with Laura and Sarah (and Luke) within this week getting to know them both as people and their choreographic minds. I fully respect their ethos and in making dance for the street and busking dance theatre I get to be a part of this exciting journey too! Is the street ready for “a brand new beat?… Summer is here and the time is right for dancing in the street” with “Us”.

It’s a pleasure to invest in Laura and Sarah’s vision and help bring those creative sparks to life. This week has been full of inspiration, energy, excitement and laughter. Thank you Laura, Sarah and Luke!

We love dance, so we are hosting a social event to show it. We will kick off by teaching a special one-off social dance workshop to get you moving. This will be followed by live music from The Vagaband as well as dj’s spinning all sorts of dancing tunes to get your feet shuffling. Dance films and cabaret performances will be presented throughout the night. So put on your dancing shoes, dust off your favourite moves and come and show your love of dance!
This is a fundraising event for GlassHouse, all proceeds will be invested in the company allowing us to continue making exciting and engaging performances as well as offering opportunities for everyone to experience dance.

Tickets are aviable online www.norwichartscentre.co.uk or by calling 01603 660352

We have a new website! You can now find us at www.glasshousedance.co.uk

This site will still be used as a blog and to keep you updated with all our news. Please do take a look at the new site, feedback is very welcome!

We know we don’t look our best at the moment. Our new website is currently under construction. In the meantime you should be able to find all info about us on here.  Please drop us a line if you have any other questions.

We have a new film! This was filmed at The Out There Festival, Great Yarmouth in September.

To give you a little taste of You, Me and Everybody Else here is a short film of the performance as part of the Norfolk and Norwich Festival earlier this year.

You, Me & Everybody Else Norwich short

We would love to know your thoughts!

Future radio recently broadcast this little feature about our latest work. A no-nonsense guide to the performance, it gives you a little taste of what we  have been up to.